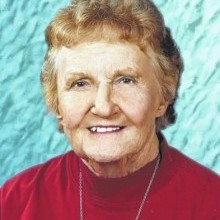 Mrs. Maude Scott Miller age 86, of West Jefferson, died on Thursday, October 27, 2016 at Ashe Memorial Hospital. Mrs. Miller was born on September 12, 1930 in Watauga County, NC to Waddie Hester and Ethel Houck Scott. Mrs. Miller was preceded in death by parents, granddaughter, Heather Trivette, husband, Harry Lee Miller all her brothers and one sister. Mrs. Miller was a faithful member of West Jefferson United Methodist Church, and was a member of the church's United Methodist Women group. Maude was a great cook and was known for her delicious chocolate pies.

The family respectfully requests no food please. Flowers will be appreciated, or memorials may be made to Ashe County Rescue Squad, 300 Mt Jefferson Rd, West Jefferson, NC 28694.

Words of comfort and remembrance may be viewed or sent to the family through our website at www.badgerfuneralhome.com.