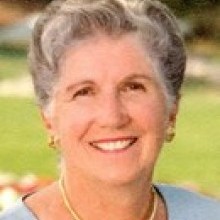 Mary-Joan Doyle Carson (nee Cronin) of Osterville MA, Haverford PA, and Delray Beach, FL died peacefully at her home on Cape Cod with her family by her side, on October 20, 2016. She was 87.

Mary-Joan was born on September 20, 1929, in Andover, MA. She graduated from Boston Girls Latin School in 1946 and Manhattanville College with a degree in Mathematics in 1950. Beloved wife of her high school sweetheart, the late John J. Doyle (Jack), of West Roxbury MA. Mary-Joan and Jack moved extensively throughout the US and Europe as Jack’s career progressed and as they raised their family together. Mary-Joan liked to say she was lucky enough to have found the love of her life – and did it twice. After losing Jack to lung cancer in 1991, she married the late Joseph T. Carson of Haverford, PA in 1995 and enjoyed 14 wonderful years with Joe. Mary-Joan’s children and grandchildren remember her for her gentle and caring nature.

She was a passionate golfer, avid traveler, and great storyteller who could captivate the room with her fantastic tales of wonderful experiences. Her surprising wit made it all the more enjoyable. Mary-Joan took up golf after raising her children and became an avid golfer who always loved a good match with her family or friends. She was a member of The Oyster Harbors Club in Osterville, Overbrook Golf Club in Bryn Mawr, and The Little Club in Gulf Stream, FL.

A Funeral Mass was held on Monday, October 24th in Osterville, MA. A memorial mass will be held at Saint John Neumann, 380 Highland Lane, Bryn Mawr on Saturday, November 12th. Visitation will begin at 9:30 followed by the memorial mass at 10:30. Burial will follow at Calvary Cemetery in Conshohocken.