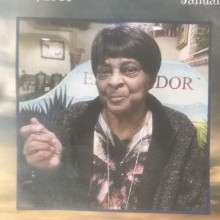 Mary Jo Reed Pope ,74 of Jefferson  city passed away peacefully Friday January 4 2019 at river city living community surrounded by her loving family. She was born November 17,1944 to Delphi’s Leola Branham and Vinci’s Brooks and was united in marriage to Herman Pope August 6,1966 in Jefferson  Mary Jo was a beautiful loving and kind person but most of all she was a devoted and dedicated mother and grandmother. Her greatest joy in life was being there for her family Mary Jo was processed in death by her mother Delphi’s Branham and her father Vinci’s Brooks ; Sisters Sarah Smith and Saundra Armstrong;Brothers Harry Johns and Russell Branham She leaves her memory to be cherished by her children Jason Pope and Nikita Pope mother n law Carrie Paulateer Grandchildren Jerrell Faulkner Jermauri Faulkner Alicia Reese Xavier Reese Jaylahbi Pope and Angie Roark a host of nieces , nephews,extended family and friends