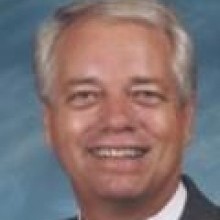 67, of Humble, Texas, was called home to eternal life by his Lord and Savior, Jesus Christ, on Wednesday afternoon, November 20, 2013.

He was born on June 4, 1946 in Sheboygan, WI. He attended Concordia Seminary in St. Louis, MO, graduating in 1972 with his Master of Divinity degree. He was ordained at Redeemer Lutheran Church in Manitowoc, WI, and later received his Doctor of Ministry degree in 1985 in Church Growth and Organizational Management from Fullerton Theological Seminary in Pasadena, CA.

He served His Lord at congregations in San Jose, CA; Fallbrook, CA; Lake Worth, FL; Humble, TX; and Cleveland, TX. He served as Pastoral Counselor for the International Lutheran Women's Missionary League of the LC -MS, as well as Circuit Counselor in Florida. His hobbies included golf, woodworking, traveling, reading and doting on his grandchildren. He also enjoyed being a member of the Woodworking Club of Houston and its Scrollsaw Splinter Group.

He was preceded in death by his parents, Carl and Arline (nee Draheim) Behring. He is survived by his wife of 44 years, Sarah; their two children, Jennifer (Greg) Schutte ; Jeff (Kate) Behring ; brother, Glenn Behring ; sister, Jean (Rev. Richard) Schwandt; and grandchildren Emma, Ethan, and Elisabeth Schutte, Andrew and Jacob Behring as well as 4 nieces and 2 nephews.

The funeral service for Pastor Behring will be held on Sunday, November 24, at 4pm preceded by visitation beginning at 2:30pm at Trinity Lutheran Downtown, 800 Houston Avenue, Houston, TX. The committal service will be held at Lutheran Cemetery in Sheboygan, WI. In lieu of flowers, his family asks that all memorials be made to Concordia University Wisconsin (cuw.edu; specify Mark Behring Memorial Fund), Concordia Seminary, St. Louis (www.csl.edu), and the Lutheran Women's Missionary League (www.lwml.org).