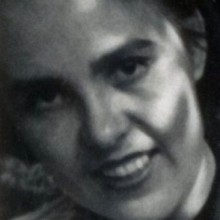 Margaret Kustov Evanusa passed away peacefully on November 16, 2015 in San Rafael, California. Born on August 29, 1925 in Veronezh, Russia she and her physician parents were relocated to Germany under occupation during WWII. She and her mother emigrated to the United States in 1950, where she met her future husband in a Russian Orthodox Church in Baltimore, Maryland.

Margaret enjoyed working as a Medical Technician for many years in Northern Virginia, where the family lived and raised their children. Her hobbies included lapidary, reading, and later knitting and horseback riding. She was an avid animal-lover, and kept three cats, three dogs, and bantam chickens when the family relocated to Earlysville, near Charlottesville, Virginia.

After the death of her husband, Stephen, in 1989 Margaret relocated to the San Francisco Bay Area to be close to her daughter and her family.

She is survived by her daughter Olga Evanusa-Rowland of Corte Madera, Ca., and grandchildren Alexander + Adrian Rowland of Brooklyn, N.Y. ; and Matthew and Julia Evanusa of New York City. She will be buried in the Russian section of Rock Creek Cemetery in Washington, D.C. with her husband, and near her son Stephen S. Evanusa and mother Barbara Petrovna Kustova.