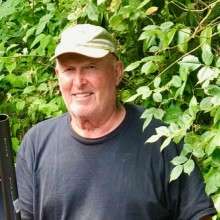 Lyle Alvin Lowe, 76, died unexpectedly on Monday, March 19, 2019, in Phoenix, Arizona of Acute Myeloid Leukemia. He was the son of Robert Lowe and Wilma Seems Lowe.

Lyle was born and raised in Bend, Oregon where he spent his early childhood riding his favorite horse to grade school, camping with his father Robert and brother Gayle, and most especially visiting with his adoring Grandma and Grandpa Seems and Aunt Lavona.

It was in Bend that he developed a life long love of the outdoors and all manner of physical activities. He was an accomplished high school athlete, including being named first string, All-State in football. He was also skilled at wrestling, basketball, track and field, baseball, and many other sports that kept him fit and active. He additionally played football for the Marine Corps at the El Toro Marine Base in California, and later he was selected to be on the practice squad for the NFL team the San Diego Chargers.

After serving with the Marines in California, and later in the Vietnam War, Lyle began a varied career path that included being a State Trooper, Search and Rescue member, an air traffic controller, and then finally settling into a long career in the banking industry. It was during this time that he married Liz Hartzheim on June 26, 1963, in Placentia, California. They enjoyed raising two sons; Justin Robert Lowe (Bryre) and Nathan John Lowe (Alysoun) across numerous towns all over Oregon, before making a home base in the Portland area. Lyle spent many years coaching his sons' baseball teams and the family spent untold hours on their boat at Lake Shasta and the Willamette River.

Lyle was also fond of time with his friends; he frequently attended the annual Hood River Olympics. There he competed in everything from horseshoe throwing to marksmanship. On top of that, he also loved playing poker, working out, and attending high school football games. His buddies were very important to Lyle and he appreciated their companionship over the years.

After his retirement in the late 1990s, Lyle met and later married Patricia Rose on December 4, 2000 in Hawaii. They enjoyed traveling the Southwest in their RV along with their spoiled cats Lewis and Clark. Lyle loved the desert environment and was often found on a dirt bike, dune buggy, or motorcycle. They both enjoyed looking for petroglyphs and other historical artifacts as they spent the winter months in warmer climates.

When he wasn't on the road, Lyle took joy in his beloved grandchildren's many sports and activities. He usually grumbled about all of the "other kids", but he loved seeing Christopher, Jordan, Ryan, Peyton, and Cami in anything they did.

Lyle will be greatly missed by all who knew him.