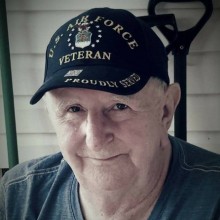 Lloyd was born on October 18, 1939, in the small village of White Lake, WI to William and Estelle (Swim) Fairchild. He was one of nine siblings. Lloyd attended White Lake High School and graduated in 1957. He joined the United States Air Force and served from 1961-1965 while being stationed at Castle Air Force Base in California. Later, Lloyd worked in White Lake, WI at the local mill until 1969. He then worked at Neenah Paper Neenah, WI from 1969 until 1989 and retired early due to health complications.

Lloyd married Eleanor Slatter in 1969 and was divorced in 1974. Together they had two children, Lori (Fairchild) Vomastic and a son Corey Fairchild, who preceded him in death.

Lloyd married Margaret (Singer) Selig on April 6, 1979 and together they had five children, James (Kristin) Fairchild, Danielle Fairchild, William Fairchild, and preceded in death by twin baby boys Jeffery, and Gordon. He was also step-father to Shawn Selig, Steven Selig, and Scott Selig.

Lloyd is preceded in death by his parents, William and Estelle; and his siblings, Arelene, Willard, Marcella, Katherine, William, Gordon, Jeanette, and Richard.

Lloyd is survived by his wife of 38 years, his four children, multiple grandchildren, great-grandchildren, numerous nieces and nephews; as well as, many other family and friends.

Newspaper obituary and memorial service to be planned at a later date.

Donate to Shawano Ambulance Services in memory of Lloyd.