In Memory Of Linda Jones 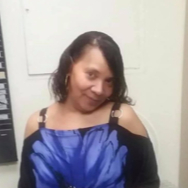 In Memory Of Linda Jones

Linda was educated in the New York City Public Schools. She went on to work for Aging In America, Dobs Ferry, and Midhouse Bronx over the span of 30 years as a cook. She was well loved by her coworkers and received many awards over the years. Family and friends also loved her cooking and she was well known for her potato salad. She had many hobbies which included cooking, watching Broadway plays, crocheting, traveling and spending quality time with her loved ones.

She leaves behind her five children Nathaniel Jones, John Jones, Catherine Jones, Natalie Moore, and Nathaniel Moore. Grandchildren Nyema, James, Aaron, Andy, Joné, Andrew, and Diana. As well as Greatgrandchildren Rhyeland, Riley, and Johni.  As well as many nieces, nephews, cousins, and a host of friends.

She succumbed her battle with cancer which she fought with the love and support of her family and will be greeted in Heaven by her lifetime partner John Rucker who passed 6 months prior.