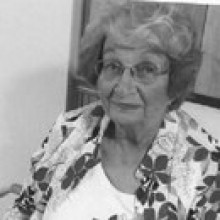 Leona Pauline EreksonRockspringsLeona Pauline Dunbar Erekson passed from this life on July 9, 2017 in Fredericksburg, Texas. She was born on Nov. 9, 1931, to Ned and Mary Leech Dunbar in Del Rio, Texas.Pauline grew up on the ranch between Del Rio and Rocksprings. She graduated from Rocksprings High School in 1949 where she made many life long friends. After she graduated from high school, she attended Texas Tech University. Her passion for photography lead her to a school in Dallas, Texas. Here she met Robert Edwin (Bob) Erekson. They were married on Aug. 2, 1953. They were blessed with two children, Paula Kay and Ronny Edwin.Pauline was a member of the Order of the Eastern Star. Pauline worked at the Edwards County Hospital, the ASCS office and Rocksprings Schools. Though she never made photography a career, she enjoyed sharing her passion with her family and friends. She loved sharing her interest in taking pictures by teaching 4-H photography classes.Pauline believed in being involved in her children's lives. She taught Sunday School classes, made costumes for church and 4-H programs, followed football and basketball teams wherever they played and endured two senior trips as a sponsor.Pauline also loved to arrange flowers. In 1981 she had the opportunity to open a flower and gift shop with her daughter. Even though the flower shop eventually was sold, she continued to provide flower arrangements for the Presbyterian Church for many years.In 1979 Pauline discovered another interest, Emergency Medical Services. Although she took the initial training for her own use and really didn't intend to "join the EMS", she discovered she really did like helping people. She traveled to Kerrville to complete her EMT class. For 32 years she served Edwards County EMS as a medic, board member and historian. Thanks to her love of taking pictures, the history of the EMS was well documented. One of the things that made her the proudest was the fact that both of her children, her daughter-in-law, one grandchild and a nephew served with her as medics during her tenure with Edwards County EMS.When another grandchild decided to follow in her footsteps, she couldn't have been more proud. Due to health reasons, she retired as a medic but continued to support the EMS financially.Pauline was preceded in death by her grandparents, Leonard and Effie Leech and Paul and Proctor Dunbar; parents Ned and Mary Dunbar; and sister-in-law Peggy Dunbar. She is survived by her children, Paula Kay (Sam) Epperson and Ronny (Denise) Erekson: grandchildren Walt (Sarah Kate) and Karrah Epperson, Naomi, Ruth, Anna, Abigail and Rebekah Erekson; great-grandchildren Tilden, Emilie and AnnElise Epperson; brother Allan Dunbar; nephews Larry (Zackie) Dunbar, Mike (Lindi) Dunbar, Andy (Kimberly) and Stanley (Leslie) Dunbar; and many nieces and nephews.Viewing is from 10 a.m. to 7 p.m. Wednesday, July 12, 2017, at Nelson Funeral Chapel in Rocksprings. Graveside service is at 10:30 a.m. Thursday, July 13, 2017, in Rocksprings Cemetery in Rocksprings with Minister Mark Wilson officiating.The family invites you to leave a condolence at nelsonfuneralhomes.net. Arrangements are under the personal care of Nelson Funeral Home of Rocksprings, Texas.