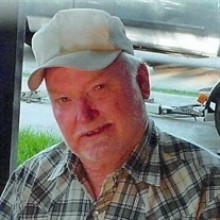 He graduated from Albany High School.

He married Helen Powell on May 29, 1959. Larry and Helen have three children, Terry, Teresa, and Larry.

After the death of his wife, Larry married Linda Davis on June 7, 1997.

Larry was a truck driver for most of his working life until his retirement. His favorite past time was traveling the country in his RV and enjoyed going to family and school reunions. He was a member of the Albany Masonic Lodge.

Mr. Potts was preceded in death by his parents, wife Helen; 7 brothers and 3 sisters.

A service in honor of his memory with Masonic Rites will be held at 11:00 AM Saturday, November 26, 2016 at Brown's Funeral Home. Bro. Anthony Williams will officiate. Interment will follow in Highland Cemetery with David Potts, Tim Potts, Jerry Potts, Phillip Staton, Larry Brown, and Ramon Salinas serving as pallbearers.

Condolences may be sent to the family at www.brownsfuneralservice.com. Arrangements are under the direction of Brown's Funeral Service, Durant, OK.