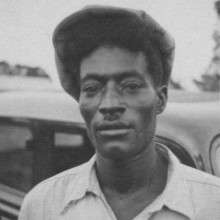 Lance belonged to Aretha Johnson and Lawrence Johnson.  He had five brothers and sisters, Lawrence jr, Connie, Cedric, Mae and Tiny.  Him and his siblings had a very tight bond.  They were inseperatble.  Lance was born and raised in Arkansas.  He loved to play the guitar and he started to like basketball.  Those activited had to get left behind when he had to attend Larimore High School.  Lance knew when he switched schools it wouldn't be easy, but he was ready for the fight,.  He was one out of the 14 african american children to attend the all white school.  Of course the protested to get the black students out, but everyday they came back.  Except one day when Lance was walking home from his stufy group, a truck pulled up beside him and beat him to the point that he couldn't walk.  When they found lance he was laying on the side of the street.  Once police found the boys the questioned and asked them why.  One replied " niggers don't belong at Larimore."  Although Lance lived a short life he touched many hearts and fought for what was right. We will forever loveg Lance Johnson.