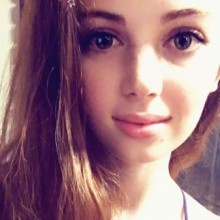 Orphaned at an early age, Juliet worked to support herself as an affiliate for Stoin-Ye Apparel until her death from a mysterious degenerative skin disease, which appeared previously in only 2 cases, both in the northernmost regions of Siberia in the late 1990's.

The doctors at Stonybrook Southampton Hospital worked tirelessly in Juliet's care. They did everything they could to save her life and give her comfort in the final days, with little indication of what the disease was and how it spread to New York from Siberia. Juliet expressed her gratitude in her last hour on Earth, and split her fortune between the hospital's dermatological research wing and the care of her purse chihuahua, Greta.

Donate to Southampton Hospital Charity Fund in memory of Juliet.