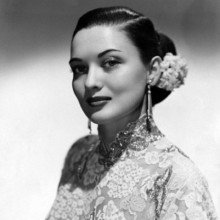 Julie Wilson, the revered nightclub performer and actress widely regarded as the queen of cabaret, died on Sunday in Manhattan. She was 90.

She died after having a stroke, her son Holt McCallany, an actor, said.

The rail-thin Ms. Wilson, her hair pulled back, a gardenia tucked behind one ear, cut a striking and elegant figure onstage in clinging custom-made gowns usually augmented by a feather boa. As she wove her spell, performing standards from the American songbook in addition to humorously racy material, she was by turns naughty and intense, digging so deeply into the lyrics she sang that she seemed to be living them.

Ms. Wilson did not shy from strong emotion. Her voice, though limited in range and not conventionally beautiful, was a forceful dramatic instrument that she wielded with the authority of a great storyteller. As she aged, she increasingly moved toward the style of speech-song known as parlando, long associated with Mabel Mercer, which imbued lyrics with a conversational immediacy. One of her many definitive performances was her rendition of Stephen Sondheim’s “I’m Still Here,” a song that could be read as the story of her life on the bumpy road of show business.

Julia Mary Wilson was born in Omaha on Oct. 21, 1924. Her mother, the former Emily Bennet, was a hairdresser; her father, Russell Wilson, sold coal for a living.

She began singing with local bands at 14 and briefly attended Omaha University (now the University of Nebraska, Omaha). She won the title of Miss Nebraska and would have competed in the Miss America Pageant, but she had to give up the title when the mother of the runner-up discovered she was three days short of 18, the minimum age.

Ms. Wilson joined the chorus of “Earl Carroll’s Vanities” in Omaha in the early 1940s and traveled with the show to New York, where she worked as a chorus girl at the Copacabana and the Latin Quarter. In 1946 she made her Broadway debut in the revue “Three to Make Ready.”

After winning a singing contest on a radio show hosted by Mickey Rooney, she was offered an engagement at the Mocambo in Los Angeles. While there she met Cole Porter, who offered her the role of Bianca in the London production of “Kiss Me, Kate.” She remained in England through the early 1950s, appearing there in musicals including “Bet Your Life” and “South Pacific.”

The nightclub she later called her “anchor” and the place where she said she “grew up” was La Maisonette at the St. Regis Hotel in Manhattan, where she first performed around 1948. She continued to sing in nightclubs in the 1950s and ’60s and appeared in road productions of “Show Boat,” “Silk Stockings” and “Panama Hattie,” but turned down the lead in the original 1954 Broadway production of “The Pajama Game” to continue studying at the Royal Academy of Dramatic Art in London. (She later joined the cast as a replacement.)

She also recorded several albums during this period, of which the most representative was “Julie Wilson at the St. Regis,” and appeared in two 1957 movies, “The Strange One,” a dark psychological drama, and “This Could Be the Night,” in which she played a saloon singer.

She later had roles in two flop Broadway musicals, “Jimmy” (1969) and “Park” (1970), but was well received in road productions of three Sondheim shows: “Company,” “Follies” and “A Little Night Music.”

In 1976 Ms. Wilson began a seven-year sabbatical from show business and moved back to Omaha to bring up her two sons, Holt and Michael, as they entered their teens. Michael died in 1991. In addition to Holt, she is survived by a granddaughter. She was married and divorced three times.

Ms. Wilson returned to New York nightclubs in 1984 with a triumphant engagement at Michael’s Pub, singing the songs of Cole Porter. She then became a fixture at the Oak Room in the Algonquin Hotel, where she reached a pinnacle of critical acclaim performing the songbooks of major theater composers with the pianist William Roy. Among the most admired of her 21 albums were the songbook albums she recorded for DRG Records. In 1988 she was nominated for a Tony Award for best featured actress in a Broadway musical for her role as the owner of a speakeasy in Peter Allen’s “Legs Diamond.”

More than a role model for other nightclub singers, she became a godmother to the cabaret scene and until very recently visited clubs many nights a week to support young talent in the field she loved. Her last memorable show at the Metropolitan Room, where she frequently performed during the last decade, was an evening of Brecht-Weill songs in 2008.

Of her performance of “Surabaya Johnny,” from the album “Julie Wilson Sings the Kurt Weill Songbook,” the critic Will Friedwald wrote: “She fluctuates between bipolar extremes of love and hate in re-enacting what can only be described as a grandly dysfunctional relationship. It is as wrenching as the most powerful blues by Bessie Smith and Billie Holiday.”

In a 1987 interview with the music critic and historian Whitney Balliett, Ms. Wilson named Holiday as her major influence. “No singer has ever moved me so much,” she said. “No one has ever had such pain and emotion in her singing. She is why I wear a gardenia in my hair every night.”

An earlier version of this obituary, using information from Ms. Wilson’s son, omitted a survivor. In addition to her son Holt McCallany, she is survived by a granddaughter.