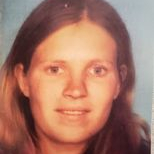 She married Ed Brooks in 1975 and they lived together in Des Moines, Iowa. He preceded her in death on February 16 ,2019. She also was preceded in death by her parents, one brother and one sister.