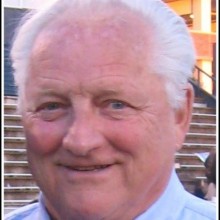 Joe passed away peacefully, surrounded by family, on November 18, 2015 in Santa Rosa at the age of 73.

Born and raised in San Francisco, California, Joe graduated from Lowell High School in 1960.  He served in the United States Navy for 4 years before beginning his career with the San Francisco Fire Department in 1970.  Joe worked for the fire department for 33 years before retiring in 2003.

Joe was an avid San Francisco Giants and 49er fan and enjoyed watching sports with his long time friend, Duane Hemingway.  He devoted his life to his family.  Joe had unique, special relationships with each of his seven grandchildren and loved spending time with them.  Joe was a proud grandpa who attended many school and sporting events.

The family would like to thank Memorial Hospice Santa Rosa for their care and support.