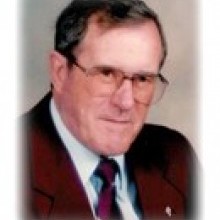 March 12, 1924 to December 14, 2016 Mr. John Jack Flowers, age 92 years, passed away peacefully on Wednesday, December 14, 2016 in Thunder Bay Regional Health Sciences Centre.Jack was born on March 12, 1924 in Cobalt, Ontario to Frederick and Jane Flowers. Jack married his love, Doris on September 11, 1948. They had 63 years together and after five years are reunited. During World War II, Jack joined the Air Force to help protect his country. After he was discharged he graduated from the University of Toronto and became a Registered Professional Forester. Jack held many different roles with the Ministry of Natural Resources. Jack had many adventures in his life, including trips and continuing his education at the University of Toronto when he was in his 40's. Despite his many trips out of town for work he was a dedicated family man with a strong Christian faith. When Doris became sick with Parkinson's disease and Dementia, Jack spent every waking hour caring for her. He set a very high standard for his family to follow. He was an incredibly strong, intelligent and independent man with a huge heart. Jack spent many years working with the village of Bunkpurugu in Ghana trying to improve their quality of life. Recently he was awarded the Naakuukni Award for Exemplary Life in recognition of his outstanding contributions. Jack is survived by his son Don (Laurie); daughter Debbie (Larry): grandchildren Sarah (Jonathan) Armstrong, Erinn (John) Antoniak, Blake Rathje (Jen Kis) and Kiirsti (Brad) Stilla; great grandchildren Miles and Lee Antoniak and Letti Stilla; twin sister Isabel Flay; and numerous nieces and nephews. The family would like to thank all of Jack's caregivers at Thunder Bay Regional Hospital, Thunder Bay Paramedics, Superior Eldercare, and The Nurse Next Door. Special thanks to Dr. Hassan, Dr. Anderson, nurses in ER and ICU and finally his nurse Rita. Your care and professionalism was exemplary. A celebration of Jack's life will be held on Monday, December 19, 2016 at 11:00 AM in St. Paul's United Church, 349 Waverley Street with Rev. Rob Smith officiating. Should friends so desire, donations may be made to the Thunder Bay Regional Hospital Foundation. Arrangements in care of the EVEREST FUNERAL CHAPEL, 299 Waverley Street at Algoma.