Celebrating The Life of Gilly 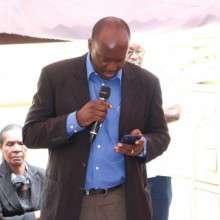 Celebrating The Life of Gilly

Gilbert Humphrey Opondo Ombima was born on 9th July, 1977 at Mater Misericordiae Hospital in Nairobi. He was the seventh born child of Lay Cannon Daniel Jeremiah Ombima and Mama Anne Benta Anyango Ombima who at the time of his birth were both working in the Government as Civil Servants. He grew up with two older brothers, Charles Ochieng and the late James Asweto . Four sisters  Betty, Judith, Doris and Millicent completed the siblings list. The age gap between him and his older siblings was a constant source of frustration to him as he felt that all his age mates had younger brothers and sisters to play with, while he was surrounded by grown ups.
Gilbert's early schooling started at Dr Barnardo's Nursery school in Nairobi and he later joined St. George’s Primary School also in Nairobi. While still in Primary school , he was transferred to Boarding School (Hill School, Eldoret)where he sat his Kenya Certificate of Primary Education (KCPE).He passed well and subsequently proceeded to Secondary school. Initially he joined the then prestigious Mbeji Academy in Siaya County, and later transferred again to Sawagongo High School where he finally sat his Kenya Certificate of Secondary Education (KCSE) and passed well with good grades. Generally the hiccups of school transfers and having to adjust to new environment did not deter him from maintaining good performance. The family was mildly affected by relocation of parents from Nairobi to Gem in Siaya County after retirement. It was interesting to learn that amidst all the challenges of being in a rural secondary school, he blended well with fellow students and was chosen as the entertainment prefect. He took the responsibility with humility and seriousness thus fulfilling the expectations of his fellow students and teachers.
Gilbert, the city boy, adjusted very fast to farm/village life where the parents relocated permanently following official retirement.He was able to handle various farmhand responsibilities even in the absence of farm labourers. On one occasion, he was home alone and discovered that one of the cows-in-calf had gone into labour and needed help to deliver the calf.Gilbert rolled up his sleeves in the cowshed and did what was necessary to help the delivery process. He happily reported to his parents upon their return that they were one cow richer after the safe delivery!!
Gilbert was a smart little boy as a kid. He believed his teachers were the best and knew everything. He would come home and freely share what they had learnt in school. One day he came home and announced that they were taught about " Domestic Animals "which he found very exciting. In order to demonstrate his understanding of the topic, he posed the question at the dinner table: " Mum,Is Jim (late brother) a domestic animal?".    Everybody looked up from their meal shocked !! Mum calmly answered him , '"No , Jim is your brother- And he is not a domestic animal !!" Young Gilbert recounted the definition of a domestic animal and defended his assertion strongly to the disbelief of the family who wondered whether he should attend a different school !!

Gilbert continued with his education at the Kenya Polytechnic University College, where he enrolled for the Advanced Certificate in Print Organization. He was able to excel in this line of training which he handled with a lot of zeal and passion. Due to the gradual change of technology he took a bold step to improve his skills by taking up an additional Course at the Kenya College of Accountancy in the year 2000. This time he chose to undertake a Diploma in Computer Hardware Maintenance. Considering his prior exposure in handling various equipment, this particular training was almost a walk-over and he often recounted how his colleagues would marvel at how much he knew long before the Lecturer taught respective lessons to the  class.  A year later ,in 2001,he enlisted himself at the Kenya Polytechnic University College for a Diploma in Printing Technology which again was relatively straight forward for him and he clearly enjoyed every moment of the training.
In terms of work experience, Gilbert had an initial short stint of six months in 1996 as a Printing Press Assistant at the Kenya Railways, Nairobi and later became a Computer Designer at Bizone Printers and Packages Limited on a short term Contract which ended in October 1997.
Considering the year 1997 was a General Election Year,he applied for the position of a polling clerk for the Electoral Commission of Kenya(ECK)in Gem Constituency. Upon conclusion of this exercise, he was offered a Machine Operator Position at Government Printers Nairobi for another short term contract where he served for a large part of the year(1999).
The quest to improve his skills led him to undertake special skills training while occasionally getting seasonal attachment from Industry in compliance with Institution policy.
Generally speaking, Gilbert advanced in his career by pursuing the Technical and Vocational Education Training approach (TVET) and he was a living example of how TVET can transform an individual's career path.
It was hardly surprising when he eventually attained a Bachelor of Science Degree in Information Sciences scoring an impressive Second Class Honors Upper Division from Moi University (Nairobi Campus). His classmates attested to his prowess in simplifying seemingly complex assignments and  freely enjoyed sharing his knowledge with close colleagues. The desire to continue furthering his education again led him to enroll for the Master of Philosophy in Information Sciences, Records and Archives in August 2011. Before his untimely demise, he believed that he would graduate sometime in 2019. Unfortunately, the Good Lord thought otherwise and his various classmates have expressed the real void he has left behind as they struggle to get to the finish line.
Apart from the rich academic background, Gilbert found time to passionately serve God