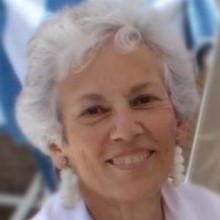 CHUCK, Georgina, 73, passed away December 1, 2014 with her family by her side. Beloved wife of Alex Chuck (deceased). Loving mother of Mike (Monica) Chuck and Sam (Liza) Chuck. Devoted Baka of Mikie, Jack, Lily, Stevie and Abby. Dearest sister of Sophie Gluhaich. Dearest aunt of Mitch (Janet) Chuck, Pete (Tracee) Gluhaich, Michelle (Mike) Wynn, and Dan (Christina) Gluhaich. Great aunt of numerous nieces and nephews. Sister- in-law of Angie (Chuck) Gill, Maxine Chuck, Millie (Charlie) Fleskas and Lucielle Deretich. Georgina was preceded in death by her parents Theodore and Draga Deretich, brother Vido T. Deretich, nephew Ted Deretich, and brothers-in-law Peter Gluhaich, Don Chuck, and Ken Gill. Georgina was born and raised in Watsonville to immigrant parents from Herzegovina and Montenegro, Theodore and Draga Deretich. She enjoyed a wonderful childhood with a loving family, she graduated from Watsonville High School, went on to attend San Jose State University and began a career in the Travel Agency business. In 1962 she married the love of her life, Alex Chuck, an orchard farmer in San Jose. They moved to Gilroy in 1965 to start El Camino Crop Supply. Georgina and Alex raised two boys, Mike and Sam, which were the center of their lives. In the early 70’s Alex and Georgina returned to farming, where they continued until the early 80’s. At that time, Georgina started a small giftware's business making servings trays, trivets and recipe boxes which blossomed into a nationwide (and eventually international) business. Alex and Georgina enjoyed running their business together until retiring in 1998. Throughout her life, Georgina enjoyed her family at countless dinners, school events, parties, vacations and everything in between. She also enjoyed numerous longtime friends in the Gilroy and Watsonville communities including, Women In Touch, Watsonville High Class of ’59, St. Michael’s Serbian Orthodox Church, Am Slavs, and Omladina. She will be truly missed but her lasting love, laughter and smile will remain with all who knew her.