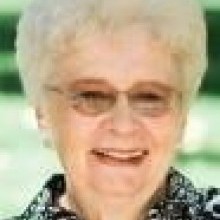 Our beloved wife, mother, grandmother, sister, and friend passed away unexpectedly on Thursday, Dec. 15, 2016. Gay Blanchard Orr was born on February 14, 1939, in Chester, Idaho, to William Arthur Blanchard and Clara Marie Hansen Blanchard. She was the third of nine children. She grew up on the family farm in Chester.

She loved going to school and learning. She attended grade school in Chester and Jr. and Sr. High School in St. Anthony. She graduated from South Fremont High School in 1957, attended Ricks College and BYU, where she received her Elementary Education degree.

She married Roger Orr in the Idaho Falls Temple on June 8, 1960. They spent 56 wonderful years together in the St. Anthony area, where they raised their five children. She was a loving, patient, and unselfish mother. Her children were her pride and joy.

She was an active member of the Church of Jesus Christ of Latter Day Saints. She had incredible faith and was dedicated to serving the Lord. She served as Primary President, Stake and Ward Young Women Counselor, Relief Society Counselor, Ward Activities Chairman, Teacher, Organist, Visiting Teacher, and home teaching companion to her husband. She served two missions with her husband. Their first mission was to Nauvoo, Illinois, from 2002 to 2003. Their second mission was at the Humanitarian Center in Salt Lake City from 2004 to 2005. They've served as temple officiators in the Idaho Falls and Rexburg Temples for 10 years.

She was a devoted teacher and taught in Shelley, Rigby, Menan, and St. Anthony for 25 years – mostly in kindergarten. She belonged to Delta Kappa Gamma, an honorary international women's teachers organization. She was nominated three times to "Who's Who Among American Teachers."

She loved talking with people and being involved. She served several years as a volunteer at the St. Anthony Visitor's Center. She belonged to the Mellodaires and Melody Men singing group. She was a member of DUP. She was always thinking of others and was a literal angel on earth. Everyone loved her and she loved everyone she met. She was a great Christ-like example in all that she did. Her laugh, love, smile, great meals, pies, homemade bread, and constant energy will be sorely missed.

She also enjoyed cooking, canning, walking, gardening, riding bikes, traveling, collecting bells and photo albums, attending sports events and concerts, but most of all spending time with family and friends.

Funeral services will be held Monday, Dec. 19, at 11 a.m. in the St. Anthony LDS Stake Center. The family will receive friends on Sunday from 5 p.m. until 6:30 p.m. at Bert Flamm Mortuary and on Monday from 10 a.m. until 10:45 a.m. at the church. Interment will be in the Parker Cemetery.

Condolences may be sent to the family online at www.flammfh.com.