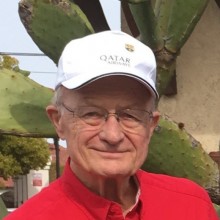 Fred was born to Nick and Marie Poss in Aurora, Illinois, on November 15, 1933, where he graduated from Marmion Military Academy in 1951. He attended college at the Virginia Military Institute and graduated from Northern Illinois University in 1957 with a degree in chemistry. In 1974 he received his MBA from Pepperdine University and an executive MBA from Stanford University in 1976.

Fred married his beloved wife, Petrene, in 1960 and they have lived in Temecula since 1998. Prior to that time they lived in San Clemente for 15 years. Throughout their marriage they also lived in England, Texas, Connecticut, California, Illinois, Tennessee, and Virginia.

Before he retired from his career as a corporate executive, Fred's life revolved around work and family. Upon retirement his life initially centered around taking care of Petrene during her successful cancer treatment in 1998. While she was recovering, Fred built a bookcase for his home office. From there, he began his hobby of making fine wood furniture using the methods of the Arts and Crafts furniture makers from the early 20th century. In his garage, he built a wooden harp for Petrene (in a loving nod to her Irish heritage). He then rebuilt their entire kitchen cabinetry, as well as the cabinetry and trim in their family room. Fred soon realized that stained glass was integral to the style of woodworking he was creating so he took a class and created stained and leaded glass lamps and doors, as well as windows recreated from Frank Lloyd Wright designs. Other creations included a kitchen table and chairs, a bedroom set, reading chairs, and many other projects. Fred's last projects were to rebuild the cabinetry in two of the bathrooms in their house.

Fred's other hobby was tracing his family's genealogy, as well as Petrene's and that of some of his children's spouses. All in all, he spent five years doing this and ultimately created a document going back almost 300 years. Fred is proud of his German descent and traced his family back to their ancestral home in Mörtelstein, Germany, where relatives of his reside to this day and where he and Petrene visited a few years ago.

Fred was a lifelong learner. He was a prolific reader of subjects far and wide, both fiction and nonfiction. He read numerous newspapers daily and enjoyed discussing the topics of the day, both in person and via email. His interests were far-ranging, his knowledge was vast and always growing. While he eschewed television in general, he enjoyed watching BBC International. Fred believed that family came first and he enjoyed keeping in touch and spending time with all of his children and grandchildren. He also liked to watch sports, including football and golf. For his entire adult life he was interested in maintaining a healthy lifestyle. Fred was a jogger and later he became an avid cyclist, with his longest ride being a 135-miles from Mexicali to San-Felipe in 1996. When Petrene got sick he changed his cardio routine to walking in the neighborhood; this was his main exercise for the past 15 years with his dog always by his side.

Frederick is survived by 4 children: Sue Harrison (Brad), Kelle Reckinger (Bob), Kathy Kidd (Don), and Steve Poss (Amy). He also is survived by 12 grandchildren: Peter, John, and Mary Harrison; Emily, Erin, Sarah, and Jack Reckinger; Lauren and Brian Kidd; and Nick (Kelly), Connor, and Annie Poss; one great-grandchild, Windsor Poss and their beloved dog Simba. He is also survived by his sister, Linda Lauth (Al) and many nieces and nephews. He was preceded in death by his parents.

Funeral services will be private. In lieu of flowers, a donation to the American Cancer Society (or a favorite charity) is recommended.

Donate to American Cancer Society in memory of Frederick.