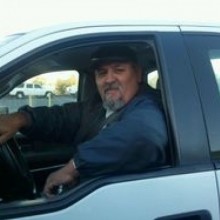 On Saturday, July 18th, Ernest John Borjas went to be with our Lord above in Heaven. Ernie was 55 years young. He was born on November 29, 1959 in Ventura, California, to Henry Castaneda Borjas and Ruth Medrano Borjas. Ernie grew up in Oxnard and graduated from Hueneme High School in 1978. He was quite the athlete. He played pop warner football during his middle school years and was proud to be a Port Hueneme Rhino. He played baseball on the Navy base and would ride his bicycle to and from practice and games. In high school he played baseball and basketball. Ernie started his career with the City of Oxnard in 1981 as a trash man back in the day when they followed the trash trucks and physically picked up the trash cans and emptied them into the back of the trash trucks. Ernie worked for the trash department for 33 years and saw the city’s trash department become automated and grow to what it is today. He eventually became the Residential Route Inspector. Ernie, aka Red Eye or “276”, retired from the city on his birthday in 2014.

Ernie loved watching men’s college basketball games and was a diehard UCLA Bruins fan. He enjoyed watching the LA Dodgers, the Oakland Raiders, the LA Lakers, men’s college baseball games, women’s college softball games, and the Little League World Series games. Ernie enjoyed traveling to Honolulu, Hawaii and staying at the Hale Koa Hotel on Waikiki beach and relaxing at the Barefoot Bar, drinking a Coors Light or trying one of the tropical drinks on the menu. Ernie loved going to Las Vegas and especially to the Chumash Casino Resort with his gambling buddies. Ernie enjoyed listening to old school music and his favorite artists were Ricky Nelson and Johnny Guitar Watson. Ernie had a great sense of humor; he was always funny and he liked to make up nicknames for family and friends he was fond of. You should consider yourself lucky if he had a nickname for you. Ernie enjoyed taking selfies, especially ones with his grandkids, and he liked to photo bomb people too. Ernie enjoyed talking to everyone; he knew a lot of people. He would see people he knew wherever he went, and this included Waikiki, in San Diego, or in Las Vegas.

In lieu of flowers, the family requests donations be made to establish a fund in Coach Ernie Borjas’ name that would help sponsor youth sports teams with tournament fees, to help buy equipment or uniforms, or to pay the sign up fee for deserving kids. Donations may be mailed to P.O. Box 1236, Port Hueneme, CA 93044. Ernie coached countless numbers of kids throughout his many years of coaching. He hoped he made a difference in those kids’ lives.