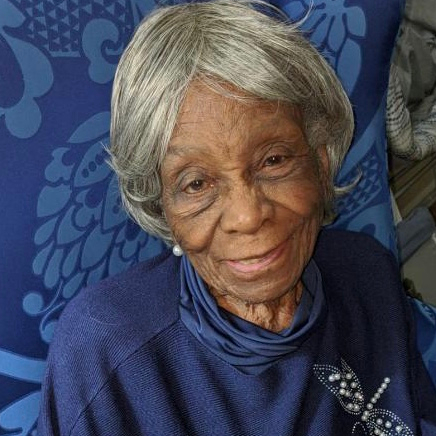 Bold. Fearless. Compassionate. Joyful. Elaine Uris Wattley was born September 17, 1920 to parents Moses and Eva Wattley in Scarborough, Tobago. Her siblings were Lorna, Ina, Cecil and Lloyd Wattley. Determined to enter the field of nursing despite her father's wishes, Elaine attended nursing school and became a nurse at Scarborough Hospital. Eventually, she went to the neighboring island Trinidad and worked at Port of Spain General Hospital.

While at Scarborough, Elaine met and began a lifelong friendship with fellow student Evelina Darlington. When the time came for Evelina to give birth to her only child Cherryl, in Glamorgan, Tobago, Elaine actually helped in the delivery process and Cherryl was born on the same day as Elaine!

Elaine moved to America and persuaded her friend Evelina to join her. After settling in Detroit, Elaine married Ardrick Phillinganes in October of 1955, received her Registered Nurse License the following month and in Jaunuary of 1956, became a US Citizen. Elaine then gave birth to Gregory Arthur in May of 1956, followed by Kevin Lewis in Ocotober of 1960. Unfortunately, Elaine and Ardrick divorced but Elaine went on to build a solid career at Detroit's Highland Park General Hospital which led to a Head Nurse position and ultimately, Director Of Nursing. During her time at Highland Park General, Elaine developed a reputation of integrity and excellence which produced many lasting bonds with colleagues such as Willie Parker, who, with her husband Tonnie, became extremely close friends and were made God Parents to Greg and Kevin.

Everyone from every background who was placed in Elaine's life was enriched and blessed by her hearty laugh, brutal honesty, fierce loyalty, passion for life and her love of God. This is evidenced by the deeply rooted friendships from all over the world that remain to this day.

Elaine went to be with The Lord on December 15, 2021. She is survived by her sons Gregory and Kevin, grandchildren Diana Marie, Ellian Marie, Lennon Gray, Lorne Ellington, Sherman Wagner-Phillinganes, Tony Young, nephew Talbot Roberts and a host of family and friends.

Some say, "Love: It is a river

That drowns the tender reed"

Some say, "Love: It is a razor

That leaves your soul to bleed"

Some say, "Love: It is a hunger

And you, its only seed”

When the night has been too lonely

And the road has been too long

And you think that love is only

For the lucky and the strong

Just remember in the winter

Far beneath the bitter snow

Lies the seed that with the sun's love

In the spring becomes The Rose.