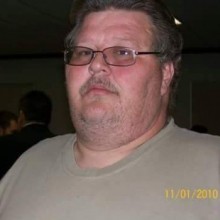 Eddie Ray was born July 23,1968 to Chester L.Gaulden and Betty L.Gaulden in Pryor, OK. He’s proceeded in death by both of his parents, 3 sisters: Angela D.Gaulden, Frieda Norris, and Rose Thomas, and 1 brother: Arthur L.Gaulden. Eddie was born in Pryor, OK and raised in Oklahoma City and spent the remainder of his life between Oklahoma City and Lubbock,TX. He enjoyed raising his pit bulls and horses. He also enjoyed working on his truck (his pride and joy). He was an avid OU fan. He will be remembered for his ambition to help people, his laughter, and his temper. Eddie Ray went to be with the Lord on August 24, 2015 around 10:00 am after 8 months of battling for his life. He is survived by 1 daughter: Marissa Gaulden, 1 grandson, 3 step-children: Chris, Becky, and Pete) all of Lubbock, TX. 3 sisters: Leah Moore, Betty Love of Oklahoma City and Bonnie Riddell of Las Vegas,  2 brothers: Chester L.Gaulden Jr and Nick (Valeta) Gaulden, 2 aunts, and one uncle, all of Oklahoma City and 2 brother-in-laws: Steve Ramos, and Gilbert Ramos of Lubbock,TX, and many nieces and nephews. Eddie Ray was a loving brother, father, and son. He will be truly missed by all whom knew him.

A Memorial Service will be held at:

Preach Unto Them Jesus