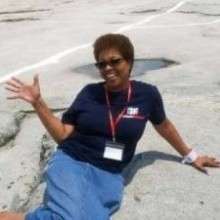 Doris Nelson was a mother of two, a twice over cancer survivor, and an avid teacher for those coming back from military duties overseas. She believed that anything is possible if you had faith and worked hard. Though she passed so young, Doris accomplished many feats in her life other than the greatest already mentioned.

Doris took much pride in making sure that her family always had a house to come to when in need. Her doors were never closed off to anyone. From community donations, to volunteering in the soup kitchens to help those less fortunate, you would always see Doris smiling, even when she was tired. Being handicapped never stopped her like most would think. Even with only one leg, she would still do just as much as someone with both limbs. Nothing was too impossible for her. But now that her time has come, and though she is no longer with us, her legacy lives on through her two children.

"Smile favorably on us mom."