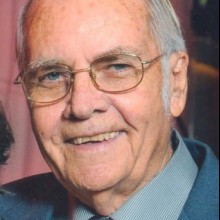 Donald Kent Splawn 87, of Kingston passed away peacefully Saturday, October 15, 2016 at the Brookside Nursing Home in Madill, Oklahoma. He was born on March 13, 1929 in Marshall County to the late Taylor Zachary "Dog" and Mamie Splawn. Donald was raised in Madill and graduated from Madill High School before moving to California where he was married to Johanna who preceded him in death. Upon returning home to Kingston he married Betty Lou who also preceded him in death. He made his living working in insurance sales before eventually owning Texoma Satellite and Mini Storage, retiring in 2010. Don was an active member in the Texoma Southern Baptist Church, and spent his free time working in the yard and traveling whenever he could. He enjoyed his time with his special canine children most of all.

Donald was preceded in death by his parents, his first wife; Johanna, his second wife; Betty Lou, his parents, a daughter; Linda Decker, two brothers; James and Jackie, a sister; Vivian Biggerstaff, and one stepson; Roy Routt.