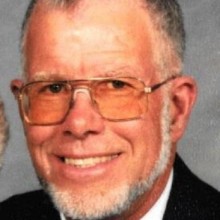 Dell went home to be with the Lord on February 15, 2016, one month short of his 80th birthday. He died from complications following heart surgery.

He was born on March 16, 1936 in Port Townsend, WA to Wendell and Lillian Redding. He spent the first 13 years of his life in Washington State where he began his lifelong love of the outdoors. The family which now included his sister, Diane, moved to Carmel Valley, CA, in 1949. He graduated from Carmel High School in 1954.

He attended Stanford University for 2 years and then joined the Navy. While in the Navy he saved his earnings allowing him to travel, ski and eat his way around Europe with his sister Diane. Upon returning he decided to go into teaching, earning his BS degree in Biology at Fresno State and an MA in Education at San Jose State. While attending Fresno State he met his future wife, Barbara Merrell. They were married in 1963 and moved to New Zealand where he taught his first biology class in a country where he didn't know many of their plants and animals! He learned as much from his students as they learned from him. Their first daughter, Tracey, was born in Blenheim, New Zealand. After two years they returned to the US and made their home in Modesto, CA, where he taught high school and community college, and where their second daughter, Bethany, was born. Shortly after that, the family of four moved to San Jose, where he became a college instructor teaching Anatomy to nursing students at San Jose Community College. When SJCC expanded and built the Evergreen Valley College campus, he was instrumental in helping to set up the Science Department, and he taught there until his retirement in 2001. He always enjoyed reconnecting with former students who were working in the healthcare field.

Love of nature permeated his life, and he passed on that love to his family, friends, and students. A near-fatal ski accident in college didn't stop him from getting back on the slopes, and inspired him to become an active member of the Tahoe Ski Patrol. He enjoyed taking kids on fields trips, introducing inner-city kids to nature, sharing his passions through field programs to Anza Borrego, the California Coast, and Alaska. Viking blood flowed strong through his veins, and continues to flow in the lives of his children and grandchildren. Trips to Scandinavia, Europe, Alaska, New Zealand, and Africa were some highlights of his life. He loved every kind of outdoor activity, from camping and hiking ("It's just over the next hill…"), to skiing, fishing, and golfing with family and friends. His love of life and outgoing personality drew people to him and he has lifelong friends from almost everyplace he went.

Dell loved his family and was a man of deep faith. He continued to grow closer to Jesus and was striving to make Him not only his Savior but also the Lord of his life. He was a member of Cypress Community Church and other small groups where many people felt his gift of service.

Dell was preceded in death by his parents Wendell and Lillian, and his sister Diane. He is survived by his wife, Barbara, his daughters, Tracey Boynton and Beth Redding Stange, sons-in-law, Tim Boynton and Scott Stange, grandchildren, Andrew, Luke, and Kennan Boynton, four brothers-in-law, cousins, nieces, nephews, and more friends than can be counted.