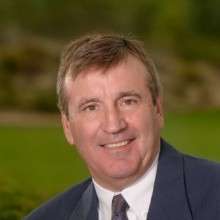 David Stewart Goff of Scottsdale, Arizona, age 59, passed away Saturday, March 17th, leaving behind a loving wife and 3 children to hold down the fort here until reunited again.

David (Dave) was an extremely devoted husband and a wonderful father. He empowered, coached, advised and genuinely supported his family each and every single day. His warm welcoming smile, positive perspective, easygoing nature and readiness to tackle the day will truly be missed.

Dave was born in Chicago, Illinois on August 10, 1958, the second of 5 children to Don and Joy Goff. He spent the majority of his childhood in Homewood, Illinois, where he excelled as an athlete in both tennis and basketball, winning the Illinois State Tennis Doubles and being awarded All-Conference and All-State for basketball. He smartly chose to attend Texas A&M, where he started as Aggie point guard for 4 years, held records for 535 assists in his career and served as Co-Captain leading the Aggies to win the Southwest Conference Championship and to the Sweet 16 Tournament. After completing his degree in Business, Dave worked as a Graduate Assistant for the Aggies while he completed his MBA.

After college, Dave worked as a stockbroker in Fort Worth Texas. He married his college sweetheart, Amy Schrickel Goff. He then consulted with a golf architect firm in Long Grove, Illinois and lived in Barrington, Illinois where he and his wife had their first child, Danielle Goff. Dave was offered a position in golf management in Scottsdale, Arizona with Western Golf Properties where he worked for 11 years. During this time, they had 2 more children, Kate and Will Goff. Many a night was spent cheering and coaching his children's teams, making life-long friends in the process.

Following his time with Western Golf, Dave branched out on his own to work on a project in Tomball, Texas, High Meadow Ranch Golf Club. Following this endeavor, he started his work with OBSports, a golf management company, serving as the Vice President of Operations. Dave continued to play recreational basketball and golf and enjoyed all sports including tennis, camping, water skiing, snow skiing and hiking.

Dave supported various charities with his wife and remained a supporter of his beloved Aggie family. Dave was a Christian, his beliefs strong, and he was confident in the afterlife in which he would be going to after his resilient fight against cancer.

In Dave Goff style, with no frills or pretense, a small service will be held Saturday, March 24th at 10 a.m. at Chaparral Christian Church in Scottsdale, AZ. A Celebration of Life will be taking place that same day at 5 p.m. at Handlebar J's in Scottsdale, AZ.

In lieu of flowers, the family requests donations be sent in memory of Dave Goff to the Texas A&M 12th Man Foundation for an Endowed Men's Basketball Scholarship in his honor [12th Man Foundation, P.O. Box 2800, College Station, TX 77841-2800] and/or the Melanoma Research Foundation.