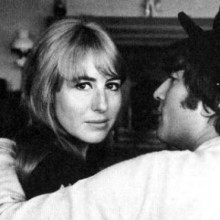 A message on her son Julian's website said she died "following a short but brave battle with cancer".

It said: "Her son Julian Lennon was at her bedside throughout. The family are thankful for your prayers."

Julian also tweeted a picture of his mother, who was 75, inside a heart with the message "In Loving Memory".

Lennon was born Cynthia Lillian Powell in Blackpool on 10 September 1939.

She grew up in Hoylake with her parents and two elder brothers and started at Liverpool College of Art in 1957.

Cynthia met Lennon at art school when he tapped her on the back in class and simply said "Hi, I'm John".

The couple married just before Beatlemania transformed her husband into one of the most famous men in the world.

At the height of The Beatles' early success she was, at the insistence of the band's management, kept in the background so their legions of female fans were not aware of her existence.

She stayed at home bringing up Julian while the Fab Four toured the world and topped the charts.

The couple divorced in 1968 after Cynthia discovered her husband's affair with Japanese artist Yoko Ono.

Former Beatle Sir Paul McCartney said: "She was a lovely lady who I've known since our early days together in Liverpool.

"She was a good mother to Julian and will be missed by us all but I will always have great memories of our times together."

John Lennon's second wife Yoko Ono added: "She had such a strong zest for life and I felt proud how we two women stood firm in the Beatles family.

"Please join me in sending love and support to Julian at this very sad time. Love, Yoko".

Hunter Davies, who wrote the only official biography of The Beatles in 1968, described Cynthia as "a lovely woman".

"When I was writing the book I spent two years with them, visiting her home and spending time with her," he said.

"She was totally different from John in that she was quiet, reserved and calm.

"She was not a hippy at all. I think it was the attraction of opposites between them. When they got together at art school everyone was amazed - she was seen as refined and reserved and nobody thought they would last."

He added: "John treated her appallingly. He slept with Yoko in their marital home and, as we discovered later, he also physically attacked her but she was loyal to him."

Answering questions in the Independent in 1999, Cynthia Lennon said John never wrote a song for her because it was "too sloppy when you were young to dedicate anything to anybody".

"Macho Northern men didn't do that in those days. I can only muse about our time together and feel from the music."

Cynthia Lennon published memoirs of her time with John and when she was publicising one of the books in 2005, she told Good Morning America she "couldn't resist being around him".

"You couldn't resist watching what he was up to," she said, "I mean, he was a total rebel. Everybody was amazed by him".

"I have read so many books and seen so many films, and it's like we don't really exist. We are like walk-on parts in his life. We did spend 10 years together", she added.

In 2009, Cynthia spoke to BBC News about her life with John.