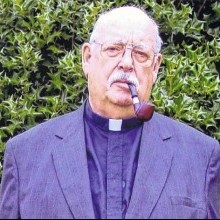 The Reverend Claude Jackson "Jack" Martin, 89, of Harrisonburg, returned to the arms of his Lord on Wednesday, Nov. 16, 2016. Jack was born on June 21, 1927 in Hillsville, VA, and was the devoted son of the late William Martin Sr. and Fannie Emaline Martin.

Jack loved to play golf and bowl in his spare time, and diligently researched his family's history.

Pastor Jack is survived by his wife of 28 years, Alvina Martin. He leaves behind three children, William "Bill" Martin and wife, Mary, of McGaheysville and their children, Norman, Paul, Verenta, Elizabeth and Matthew; Mary Bre of Staunton and her children, Ryan and Sarah; and Susan Oehler and husband, Henry "Fritz", of Harrisonburg and their children Henry "Ricky" and Robert. He also is survived by 6 great grandchildren, his former spouse, Shirley Martin, of Harrisonburg and two step-sons, Robert and John Nelson of Singers Glenn. Jack leaves behind one brother, Robert Rush Martin and wife, Susan Marie, of Max Meadows. Pastor Martin was preceded in death by his brothers, James Doran Martin and William Martin, Jr. and his beloved sister, Mary Martin Webb Ayers.

The funeral service will be held on Saturday, Nov. 26, 2016 at 3 p.m. at Gladesboro Evangelical Lutheran Church in Hillsville, VA with Pastor Joseph Shumate and Bishop Jim Mauney officiating.

In lieu of flowers, memorial contributions may be made to the ELCA World Hunger effort online at http://support.elca.org/goto/jackmartin or through your local ELCA congregation.