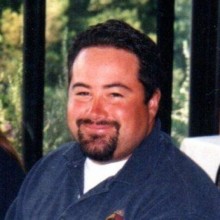 He worked for International Brotherhood of Electrical Works Local 234; Business Representative.
He was a member of the Native Sons of California, Salinas Bowmen, California Labor Council, Police Activities League and National Field Archery Association. Chris Graduated North Monterey County High School in 1993 and received a B.S. Degree from Cal Poly San Luis Obispo in the field of Forestry and Natural Resources with a concentration in Wildlife Biology in 1999.

He was preceded in death by, grandparents Ray and Millie Burditt of Salinas, CA, and his aunt Serena De Vos and Aunt Cathleen De Vos of Salinas, CA

Burial will be 11:00a.m. Monday, Jan. 11, 2016 at Queen of Heaven Cemetery, 18200 Damian Way, Salinas, CA 93907
Memorials; In Lieu of flowers the family is accepting offerings to the "Chris Burditt Memorial Scholarship Fund, ." in order to recognize and support youth in their recreational and academic endeavors into the future. Check can be made to Coast-Tel FCU Chris Burditt Memorial Scholarship Fund P.O. Box 868, Salinas, CA 93902-0868.

Chris was everything for Judy and myself, and he was the source of unbelievable love and pride for us. There are not enough great words to describe our feelings for him. Chris was our heart, our soul and the center of our universe. We miss him dearly and appreciate the tremendous support we have received from friends, family and colleagues.