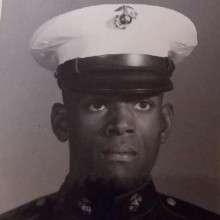 Charles was born in Denver, Colorado. His parents Charles Alden Robinson Sr. and Carol E. Banks precede him in death, along with a nephew, Layron C Triggs.

Charles Attended Manual High School and at an early age joined the United States Marine Corp. He served from 1967 to 1976, which included the Viet Nam War. Upon his return to Denver, he began working at George Washington Carver Daycare. He enjoyed working with children and played the role of Santa Clas every Christmas. Charles then began working at the Lowry Finance Center, ARC foundation, and the Veterans Administration Hospital.

Charles was a man of faith he enjoyed reading his bible. He also enjoyed cooking, watching old movies, horror movies were his favorite, and reading the newspaper comics. Charles had a very special bond with his baby sister Paula, who has been his caregiver for several years.

Charles leaves to remember him, his sisters Deborrah Lynn Robinson and Paula Jo Robinson. Nieces Miss D Robinson and Lucretia Milton. A nephew Corey Robinson, and two great-nephews LaRay Triggs and Re’ Knight, a host of great nieces, great-great nieces and nephews, and his family of the many care providers who crossed his path.

Donate to Fellowship of Christian Athletes in memory of Charles.