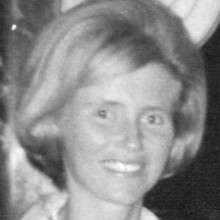 Carolyn Miller Vestal passed away in San Francisco on June 19, 2018.

Carolyn was born to Otto and Alberta Miller in Los Angeles, CA and moved with her family to San Francisco as a young child. She graduated from the Katherine Delmar Burke School and Stanford University. Carolyn subsequently enrolled in the Harvard-Radcliffe graduate program in Business Administration. Although she was at the top of her class, she opted out of the program after one year to return home to San Francisco where she went to work in the Wells Fargo Trust Department as its first female securities analyst.

Carolyn married Paul Vestal, originally from New Haven, Connecticut, in 1962, and they immediately started a family. Carolyn treasured the years she spent raising her children, Peter and Hilary. She also was very active in the local community and served in various volunteer leadership positions with the San Francisco Opera Guild, the San Francisco Symphony, the Fine Arts Museums of San Francisco and the Junior League.

Carolyn enjoyed socializing with her friends, walking, attending the symphony, reading and playing bridge. She remained an avid follower of the stock market until the very end, eagerly awaiting the latest edition of her Value Line subscription.

Carolyn is survived by her brother, Anthony Miller (Robin); son, Peter (Judith); granddaughters, Katie and Maddie; as well as, several nieces and nephews. She is predeceased by her parents; her former husband, Paul; and her daughter, Hilary.

At Carolyn's request, her family will hold a private memorial. Gifts in Carolyn's memory may be made to St. Luke's Episcopal Church or the San Francisco Symphony.

Donate to St. Lukes Episcopal Church in memory of Carolyn.