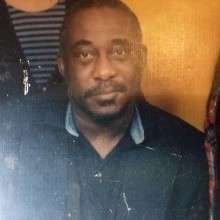 Bradrick "Ricky" McNeill Sr., 57, of Lumberton, North Carolina, gained his wings on Tuesday, November 27, 2018 at First Health Richmond of Rockingham,NC. He was born to his late mother Addie Ruth and rasied by his step-father Allen Eastman. He is preceeded in death by his brother Howard. Ricky attended Lumberton Senior High School before being employeed with Outer Banks and Nan- Ray. He was a devoted husband and father to his loving wife of 24 years Lillian and surviving by 5 children: Bradrick Junior. , Quinton, Ricky T. Mcneil, Two daughters Nakita and Francine.Two brothers and one sister: Mary R. Mcneill,Cecil and Edward lee.Three sister-in-laws: Brenda, Floretta and Yvette. A host of grandchildren, nieces and nephews along with friends and family.One step-daughter and two daughter-in-laws (Cherron and Jackie);one son-in-law (Antonio).