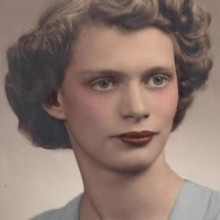 She was born on February 11, 1929 in Verdon, Nebraska daughter of Elmer and Maye McNeely Schutte. On July 15, 1949 in Hanford, California she married Walter Dillon and he preceded her in death on August 11, 2008.

Betty enjoyed crocheting, gardening, attending to her flowers, all kinds of Puzzles and watching & listening to St. Louis Cardinals Baseball. She loved spending time with her grandchildren.

You may leave condolences online at ewingschuttesemlerfh.com.