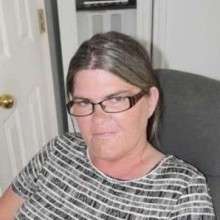 Belinda "Binky" Anderson age 54, passed away suddenly on April 10, 2019 from injuries she sustained in a car accident.  She was born March 18, 1965 to Frederick Eugene Raggo and Linda Byrd Raggo in St. Louis, Missouri.  She was a gorgeous dark haired baby girl, always ready with a huge smile, and adored by her father and mother.  Sadness entered her life before she was a year old when her daddy "Gene" died from injuries he sustained in a car accident,  11 days after that she welcomed her baby brother Eugene "Scott" Raggo.  Always the trooper she never got over the absense of her father in her life.  Gladly now they are back together.

She attended several schools during her youth, living in Missouri., Arizona., Washington State and California, later moving to Shakopee MN.

Attending high school in Shakopee, MN. she married Steve Morgan before her graduation, together they shared the love of two children. The marriage later ended in divorce.  Afterward she moved to Lydia, MN. and married Donald Beuch, adding and sharing the love of two children.  This marriage also ended in divorce.  Finally she met the love of her life and married Steven Brian Anderson in 2003, whom she was with the remainder of her life.

She is survived by her husband Steve Anderson, mother Linda Tucker, step father Bob Tucker whom she called "Dad".  Her pride and joy of her life was her children, Nicole Morgan, Travis Morgan and his son Kaleb Morgan, Gena Beuch and Jacob Beuch.  She loved them all dearly and would have done anything for them.  Besides the love of her husband, her next greatest love was that of her step grandchildren Avery and Vera and her dear siblings, Scott Raggo (Ana) of Kerrville TX., Jodi Knaak (Ray) of W. Jordan, Utah, and Alexander Wilson (Amy) of Mesa, AZ.  Preceeding her in death was her loving brother Jerry Williams (Crystal) of Utah.

Belinda was a CNA prior to becoming too physically ill to work.  She found her passion in caring for the elderly, which she did for many years in nursing homes and home healthcare. She also had a home daycare that she made her business during her years of living in Lydia, MN.  She liked arts and crafts and had the most beautiful handwriting skills, getting one of her cards would have made your day. She had a marvelous gift for writing and saying just the right things.  How she loved to bake and decorate cakes. She started a little home business called "Sweet Binky's Cakes and Cupcakes".  It was her dream to have a bakery, but remained a dream only.

Family and friends are welcome to attend a viewing Friday April 19, 1pm - 3 pm at Cremation Society of MN., 7835 Brooklyn Blvd., Brooklyn Park MN.  Celebrate life as that is what she would want you to do.

We shall miss her smile, laughter, and her baking.  Rest well Sweet "Binky".  We Love you to the moon and back.