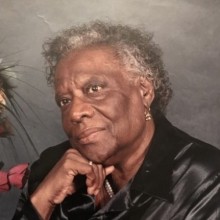 She resided in Fort Pierce, Florida and married Curtis Wilson June 8, 1940 from their union they had three children, Cutris Wilson, Theodore Wilson and Delores Davis. Later they lived together in Asbury Park. Autrie worked as a seamstress for many years. She also loved to cook and care for her family and attend church.

She is preceded by her parents, Mercy-Caroline Simmons; her husband, Curtis Wilson; and children, Curtis Wilson, Theodore Wilson and Dolores Davis; one granddaughter, Joyce Wilson.