Loving mother until the end 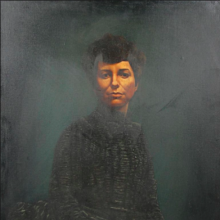 Loving mother until the end

Alice Drablow, aged 87, a loving mother of two beautiful children, passed away on June 3rd, 1920, at Eel Marsh House, Crythin Gifford, Essex. After graduating from Raven's University, Alice pursued a life of architecture and artwork, before settling down with her husband and lover, Charles Drablow, and moving to the infamous Eel Marsh House - the gothic structure that looms above the misty Nine Lives Causeway. Alice was a prominent member of the Crythin Gifford community, which made her passing very impactful to the citizens of the town.

"I'll always remember her signature black dress and bonnet, and the way that her presence seemingly parted the crowd ahead of her, due to respect if not as a gesture to thank her for the services she had provided when our children were in need of a nanny or babysitter," said one Elizabeth Daily.

In her spare time, Alice enjoyed participating in the weekly bird watching sessions hosted by Keckwick, an avid bird watcher and driver, who took the news of her passing deeply.

"Ya'know, she was like family to me. We'd go trotting on Pauline Pony every Sunday afternoon, at exactly 3 pm sharp when the tides were low, and we'd spot ravens, crows, starlings, grackles, and once, we even saw a peregrine falcon! I remember once, while we were on the causeway watching as the birds would swoop down and prey on the swimming fishies, Alice noticed that one of the baby blackbirds had dived too far down into the sea, and couldn't get its wings flappin' again. And you know what Alice 'ere did? She jumped straight into the sea - dress an' all, and saved the wee little thing. When she came out, it bowed or somethin' and just flew away. Alice didn't say nothin', but I sure hope she's having a fine time up there with all them birdies."

Not only did Alice touch the hearts of the children, adults, and birdwatchers alike, but was also a vital component in the creation and improvement of Crythin's Catholic church.

"It was Alice herself that, one day, just showed up at our door suggesting the implementation of a bell tower that could be positioned above all of Crythin and that could be seen and heard from as far as the estuary to the east and Eel Marsh House to the west. When we told her it could not have been done, she raised more than a million shillings from all of Essex and who-knows-where-else in order to create a bell of the finest Swiss copper-steel, which, more than forty years later, is still ringing as if it had been made the day before. Without Alice, our chapel would never have been what it is today," said one High Priest Alphonsé.

Alice's funeral will be held on the 15th of December, and all relatives and friends from near and far are cordially inviting to attending the ceremony at 6:30 pm, at the churchyard. She may be gone, but she will never truly leave us.