In Loving Memory of Aleyamma Kurian 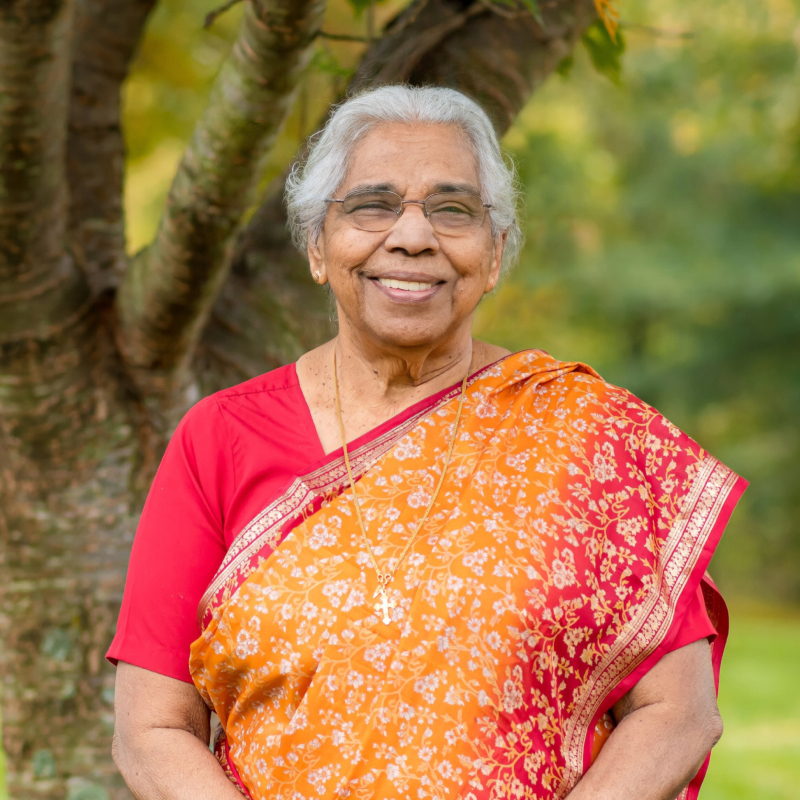 In Loving Memory of Aleyamma Kurian

Aleyamma Kurian was born on December 24, 1932, to the late Joseph and Annamma Varghese in the Mulayil Kalayil House in Mezhuveli, Kidangannoor, Kerala. She was the youngest of five siblings. She was affectionately known as Ammamma, Amminimama, Aleyamma Sir, Ammachi, and Kunjammachi.

In 1955, at the age of 22, Aleyamma married the late K.C. Kurian (Kochukadamthottil, Chengannur), who worked in the Indian Army Medical Corps. In 1957, the couple’s eldest son, Varughese Kurian (Sajeev), was born. In 1961 and 1962, their family grew larger with the births of Joseph and Sabu Kurian. For many years, Aleyamma balanced raising three sons and serving as a teacher. In 1975, the late K.C. Kurian passed away, making Aleyamma a widow and the family matriarch. She continued her 30-year teaching career and eventually became the headmistress of R.R.U.P. School in Ullannoor, Kulanada where she remained until her retirement in 1988.

In 1982, Aleyamma’s family continued to grow, starting with the marriage of Sajeev and Deena. From their union, Vinu and Sheryl were born, making Aleyamma a grandmother for the first time. Eight years later in 1990, Joseph wed Daisy and they had two kids, Dinsha and Densu. Finally in 1992, Sabu wed Jolly and their two children, Richa and Richie, were born soon after. Once retired, Aleyamma joined Sajeev’s family and moved to the U.A.E. In 1994, she immigrated to the U.S.A. with Sajeev's family, where she spent her last 28 years. Although she was in the U.A.E./U.S.A., her heart was in Ullanoor, Kerala where she had some of her earliest and fondest memories. She made it a point to visit Kerala frequently. She was proud of where she came from and the Sajeevalayam house that she built.

Aleyamma lived a fulfilled and simple life, watching her children, grandchildren, and great-grandchildren flourish. Aleyamma was an avid church-goer and led a Christ-centered life. Despite her quiet nature, she shared her love for Christ through her words and deeds, loving everyone around her wholeheartedly like her own family.

Aleyamma passed away on November 15th, 2022. She was a loving teacher, wife, mother, grandmother, great-grandmother, sister, aunt, and friend. She is survived by her three sons, her three daughters-in-laws, six grandchildren, and two great-grandchildren. We are grateful for the time we had with her and the lifetime of wonderful memories she leaves behind. Although we mourn her passing, we are at ease knowing that she is free of pain and at peace with the Lord and Savior Jesus Christ.