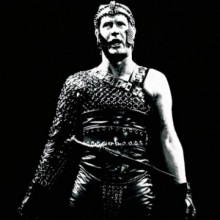 When the great Shakespearean actor Alan Howard, who has died aged 77, returned to the stage after a five-year absence in 1990, all of his special qualities came into focus, ironically, in a piece of Victorian hokum by Henry Arthur Jones. The occasion of this revival of The Silver King at Chichester was a reminder that the history of British theatre is, in the first place, written by its actors.

Howard had played almost every Shakespearean king (and Coriolanus) for theRoyal Shakespeare Company over 16 years from 1966, as well as the double of Oberon and Theseus in Peter Brook’s legendary 1970 production of A Midsummer Night’s Dream set in an all-white gymnasium; Howard as Oberon scornfully surveying the muddled lovers while swinging languidly on a trapeze is an indelible image of the RSC in this period.

More usually, he was attired in cloaks and leathers and, as in his preferred director Terry Hands’s version of Henry V, isolated in a spotlight. His clarion voice, the most distinctive (with Ian Richardson’s) of his generation, would reverberate to the rafters, his myopic demeanour – his face was studded, it seemed, with eyes like currants either side of a banana nose – seeking refuge in an audience’s sympathy. Solitude was his mindset, grand spiritual debauchery his inclination.

Howard’s silver king at Chichester was an innocent dissolute in the criminal underworld, implicated in the murder of his wife’s former admirer, pronounced “dead” and reborn in America to redeem both his impoverished family and his reputation. Striking lucky as a miner in Nevada, hence the silver king tag, he returned home in mysterious splendour, oscillating between haunted angularity and aristocratic poise. He cowered like a holy fool on his uppers and dreamed himself into the oblivion from which, like a venerably restored chieftain in snakeskin boots and silver-sleek hair, he magnificently awoke to achieve retribution.

It was as fantastical a performance as any of his Shakespearean monarchs, or his star turn as Carlos in Peter Barnes’s The Bewitched (1974), culminating in a King Lear for Peter Hall at the Old Vic in 1997 in which his trumpet-tongued voice invoked goose bumps on his cry of “O reason not the need”. This Lear, a long-haired ancient of days, may not have been as moving as Robert Stephens’s or Ian Holm’s in the same decade, but it conveyed the decline from a majestic, mystical hauteur more powerfully than anyone since Paul Scofield.

Alongside Ian McKellen, Howard was the leading heroic actor of his generation, someone whose voice, even in a misfired 1993 National Theatre Macbeth (known as the “gas-ring” Macbeth on account of some circular ground level lighting of blue flames), thrillingly encompassed, said the critic Irving Wardle, a sardonic croak, a lyrical caress, a one-man brass section and a whinnying cry of horror. His Hamlet was a model of melancholic introspection without a jot of sentiment or self-pity, his Benedick (opposite Janet Suzman as Beatrice) in Much Ado a genuinely funny and self-deluded popinjay, his Achilles in a famous Troilus and Cressida the most sensual and riveting in RSC history.

Howard was of impeccable theatrical pedigree, the only son of the comic actor Arthur Howard and his wife Jean Compton (Mackenzie). His uncle was the film star Leslie Howard; his great-uncle, with whom he spent most of his childhood in the Hebrides, was the novelist Sir Compton Mackenzie; and the Compton side of the family boasted five generations of actors and producers, including the venerable Fay Compton. Alan acted while at school at Ardingly college in Haywards Heath, West Sussex, and during national service in Germany.

He did not train at drama school but started sweeping the stage at the Belgrade in Coventry when that theatre opened in 1958. He appeared in Arnold Wesker’s trilogy – Roots, Chicken Soup with Barley and I’m Talking About Jerusalem – directed by John Dexter, and came with those plays to the Royal Court in London the next year. He first impressed as a classical actor in Tony Richardson’s revival of The Changeling at the Court in 1961 and made a West End debut alongsideWendy Hiller in The Wings of the Dove by Henry James at the Haymarket in 1963.

He played in rep with Judi Dench and John Neville at the Nottingham Playhouse and started quietly at the RSC with a melodious, virtually sung, Orsino in Twelfth Night before exploding as an outrageous, vile Lussurioso in Trevor Nunn’s black-and-white revival of The Revenger’s Tragedy in 1966. This launched him into the repertoire of Jaques in As You Like It, Edgar in King Lear, followed in the 1970s with his sequence of kings (Hands’s Henry VI trilogy was the first time these plays had been performed uncut in the modern theatre), his glorious Jack Rover in the landmark rediscovery of John O’Keefe’s 18th-century comic melodrama Wild Oats, and his only serious RSC failure, opposite Glenda Jackson, in Peter Brook’s surprisingly flat Antony and Cleopatra in 1978.

In the same Chichester season as The Silver King, he played a more coruscating duet with Penny Downie in Ingmar Bergman’s Scenes from a Marriage and moved on to the National Theatre in the 1990s as Henry Higgins in a wonderful Pygmalion with Frances Barber, George in Cocteau’s Les Parents Terribles with a then unknown Jude Law and the Player King in a revival of Tom Stoppard’s Rosencrantz and Guildenstern Are Dead.

As well as Lear at the Old Vic in 1997, he played Vladimir in Waiting for Godot directed by Peter Hall (who had directed the play’s British premiere); he and Ben Kingsley (as Estragon) were the king and the dustman of comedy, a superlative pairing of former RSC Hamlets.

Howard’s film performances were few, though he was brilliant in Peter Greenaway’s colourful modern Jacobean shocker The Cook, the Thief, His Wife and Her Lover (1989) with Michael Gambon and Helen Mirren, notable in Howard Davies’s 1993 film of David Hare’s The Secret Rapture and was the voice of the ring in the Lord of the Rings saga.

Sightings in the theatre over the past decade – Howard suffered with diabetes and eventually had one leg amputated – were rare and treasurable: a lewd and satanic Dr Schoning with Anna Friel in Wedekind’s Lulu at the Almeida, directed by Jonathan Kent, in 2001; a terrifying and daringly intoned blind prophet Tiresias with Ralph Fiennes in Oedipus at the National in 2008; and, in 2011, a semi-immobilised but still magnificent Sir Peter Teazle in Deborah Warner’s Barbican Centre revival of Sheridan’s The School for Scandal, a masterclass in how to do style and stillness in high comedy.

He was appointed CBE in 1998. He regretted not having more film work, but appreciated the ownership one had in theatre, relishing the room to manoeuvre a good director would leave him with, he said, a degree of leeway and moments of discovery every night. Quiet and reflective away from the stage, he was happiest in his house on the Isle of Barra in the Outer Hebrides, where his great-uncle had written Whisky Galore.

His first marriage, to the actor and scenic designer Stephanie Hinchcliffe Davies, ended in divorce. He met his second wife, the novelist Sally Beauman, when she interviewed him for the Sunday Telegraph; she subsequently wrote a fine history of the RSC. He is survived by Sally, whom he married in 2004, and their son, James.