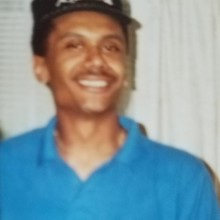 Tyrone Eugene Simpson passed away on April 4, 2017 at his home.

He was born on July 10, 1963 in Kansas City, Missouri to Kenneth Russell Hernandez and Barbara Jean Smith. Tyrone moved to Topeka, KS with his mother as a toddler, where he was adopted by his loving step-father, Leo Albert Simpson Jr. Mr. Simpson was a lifelong resident of Topeka, KS.  He was the sencond child of Barbara and the first child of Russell.  His biological father, adoptive father and brother (Leo Albert Simpson III) preceded him in death.

Mr. Simpson graduated from Topeka High School in Topeka, KS. He held several positions within his life time which included, production worker at Josten Year Book and dietary assistant at the VA Hospital. Mr. Simpson was retired at the time of his death.