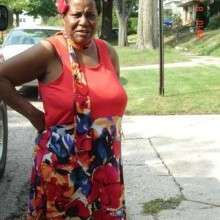 Shelia Lynn Richards was born to Levi & Helen Richards in Gary, Indiana on May 9, 1954. She was a student of Roosevelt High School & graduated in 1972, Shelia accepted Christ into her life at an early age. She was employed by the U.S. Steel Mill of Gary and worked there from 1973-1980 she had her first child a daughter in May of 1980 which led her to stop working in the Mill. She also brought forth two sons throughout her unions on earth June 1983 & October 1984

Shelia went to be with her Lord & Savior Jesus Christ on December 20, 2017 at 1:18 pm she is proceeded in death by her son Felix Richards her longtime companion Felix Daniel, her loving Father Levi Richards, her grandparents Shelley & Elizabeth Richards, her siblings Rita Childs & Marie Hines and niece Rachel Harvey.

As well as a host of nieces, nephews, relatives and friends!

Psalm 23:
The Lord is my Shepard; I shall not want. He maketh me to like down in green pastures: He leadeth me beside the still waters. He restoreth my soul: He leadeth me in the paths of righteousness for his name's sake. Yea though I walk through the valley of the shadow of death, I will fear no evil: For though are with me Thy rod and Thy staff they comfort me.Thou preparest a table before me. In the presence of mine enemies: Thou anoitest my head with oil; My cup runneth over. Surely goodness and mercy shall follow me all the days of my life. And I will dwell in the house of the Lord FOREVER!