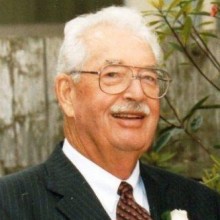 Robert Alan Heinzen (Bob) died peacefully in his sleep, at his home, on October 12, 2015, at the age of 85. He will be remembered for his warm, hearty laugh, his love of family and friends and a great pot of beans. Bob was predeceased by his parents, Fred and Bernice Heinzen and brother Lauren Heinzen.

Bob was born in San Jose, California in 1930 and moved to Salinas as a youngster, where he lived for the better part of 80 years. He graduated from Salinas High School in 1948 and subsequently attended Hartnell College and Cal Poly. While at Hartnell, he met Gilroy native, Barbara (Bobbie) Brem. The U.S. Army called in 1953 and Bob headed to basic training in Aberdeen, Maryland. Later in that year, Bob and Bobbie married.

Bob was blessed with an innate mechanical ability and was assigned to the Redstone Arsenal, outside of Huntsville, Alabama, where he was an instructor at the Ordnance Guided Missile School. After serving his Country, Bob entertained offers to work in the emerging aerospace industry; but, decided instead to return to work in the family business, Growers Equipment Company. This began a fifty year run of selling tractors. Bob always said "if you love what you do, it's not a job." Until his retirement in 1998, Bob worked for Quinn Caterpillar for nearly four decades, in a job he loved, with colleagues he admired and customers that became life-long friends.

Bob had a passion for cooking and spent many hours with his buddies preparing delectable barbecue fare for groups large and small, all over the County. He loved to tinker and fix things and "5-minute projects" would regularly morph into a full day of fun. He also played a decent game of golf, in his day, and was partial to a scotch, after the last putt fell. Bob was an animal lover and enjoyed living in his country home, with his dog Petey and several resident deer and wild turkeys. In recent months, Sharon and Norma helped provide extra special care for Bob around the Heinzen home, that he affectionately called Tortilla Flat.

Bob was loved and admired as a father, uncle, grandfather and friend to all. He is survived by his children Mike Heinzen (Marcia), Holly Heinzen (Rob), Jeanne Heinzen Hood (Mark), Dale Heinzen and Barbara Heinzen, his former spouse and friend for life. Grampa Bob was especially proud of his grandchildren, Emily, Carly, Cole, McClaren, Caden, Emma and Robert. He also leaves behind his special nephews Ric, Alan, Don and Ron Heinzen, first cousins Bea Wheeler and Dorothy Kilian, along with many great nephews, nieces, cousins, and extended family, who cared for him very much.