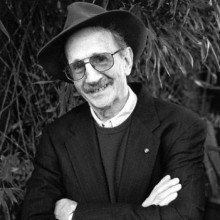 Philip Levine, a former poet laureate of the United States who grew up working on the factory floors of Detroit and whose plainspoken poems often evoked the drudgery and dignity of manual labor, died Feb. 14 at his home in Fresno, Calif. He was 87.

His wife, Frances A. Levine, said the cause was pancreatic cancer.

Mr. Levine did not publish his first volume of verse until his mid-30s, but over time he became one of the country’s most highly honored poets. He won the Pulitzer Prize and two National Book Awards before serving as poet laureate in 2011 and 2012.

He was an amateur boxer in his youth, held jobs where he wore shirts embroidered with the name “Phil” and knew how to rebuild the universal joint of a car’s powertrain. He never completely left the blue-collar life behind, as he wrote about a world of sweat and sinew seldom seen in American poetry since Carl Sandburg or even Walt Whitman.

“I believed,” Mr. Levine said in an interview with the Academy of American Poets, “that if I could transform my experience into poetry I would give it the value and dignity it did not begin to possess on its own.”

In his 1991 poem “You Can Have It,” he recalled a time in the 1940s when he worked for a bottling company, and his twin brother had a job shipping ice:

All night at the ice plant he had fed

the chute its silvery blocks, and then I

stacked cases of orange soda for the children

of Kentucky, one gray boxcar at a time

with always two more waiting. We were twenty

for such a short time and always in

the wrong clothes, crusted with dirt

and sweat. I think now we were never twenty.

Mr. Levine began working at 14 and held a series of what he called “stupid jobs.” Over time, though, he came to believe that there was an inherent value in work, a sense of decency and honor.

“He elevates the experience of working people into something that is able to impart a little wisdom to us,” Librarian of Congress James H. Billington said in 2011 when he named Mr. Levine to the position of poet laureate. “He’s the laureate, if you like, of the industrial heartland. It’s a very, very American voice.”

Mr. Levine published more than 20 volumes of verse, including “The Simple Truth” (1994), which won the Pulitzer. One of his most acclaimed books, “What Work Is,” which won the National Book Award in 1991, portrayed the world of people who ride buses and who get scars on their hands from working with machinery.

In the title poem, he wrote about standing in line, hoping for a day job:

This is about waiting,

shifting from one foot to another.

into your hair, blurring your vision

until you think you see your own brother

ahead of you, maybe ten places.

Reviewing “What Work Is” in The Washington Post, poet Alfred Corn noted that “an extra dimension of dignity has been conferred on [the] characters.” He praised Mr. Levine for being “tender without being sentimental, calm but not lacking in passion, writing in a diction as clear and lucid as spring water.”

Others sometimes criticized Mr. Levine for writing in a prosaic voice that lacked lyricism and was, if anything, too accessible. Harvard literary critic Helen Vend­ler once wrote of his work: “Is there any compelling reason why it should be called poetry?”

After teaching for many years at the California State University at Fresno, Mr. Levine later became a visiting professor at Princeton, Brown, Columbia, New York University and other prestigious schools. His worst students, he said, were Ivy Leaguers who were shocked to learn that their poems were no good.

He preferred the working-class students of Fresno State, who seemed more receptive to the notion that a poem, like a car’s transmission or an unkempt garden, sometimes needed to be rebuilt, cleaned up and put in order.

Philip Levine was born Jan. 10, 1928, in Detroit. He had an identical twin brother and an older brother. He was 5 when his father died; his mother raised her sons while working as an office manager.

In his teens, Mr. Levine began to read poetry, which he would recite to himself while holding down jobs at auto manufacturers, a soap factory and a bottling plant. In the 1940s and ’50s, he became friendly with many musicians in Detroit’s vibrant jazz scene and emulated their approach to their art.

“You do the work, and you don’t whine,” he told the Detroit Free Press in 2011. “They played because that was what they were meant to do, and at a very early age I realized that poetry was what I was supposed to do.”

He graduated in 1950 from Detroit’s Wayne State University, where he also received a master’s degree in English. In 1953, he began to attend the Iowa Writers’ Workshop, sometimes sitting in on classes when he couldn’t afford the tuition, and became a protege of the poet John Berryman.

After receiving a master of fine arts degree from the Iowa writing school in 1957, Mr. Levine began teaching at Fresno State a year later.

He didn’t publish his first book until the 1960s, but within a decade he was acknowledged as one of the country’s leading poets. He received the National Book Award in 1980 and 1991, the Academy of American Poets’ Lenore Marshall Poetry Prize in 1977 and the Ruth Lilly Poetry Prize in 1987. He received two Guggenheim fellowships and three fellowships from the National Endowment for the Arts and for two years headed the arts endowment’s literature panel.

Mr. Levine retired from Fresno State in 1992 but remained associated with the university until his death. The school awards an annual poetry prize in his honor. He had a second home in Brooklyn.

His first marriage, to Patty Kanterman, ended in divorce. Survivors include his wife of 60 years, Frances Artley Levine of Fresno and Brooklyn; three sons from his second marriage, Mark Levine of Brooklyn, John Levine of Lodi, N.J., and Theodore Levine of Midland Park, N.J.; two brothers; five grandchildren; and a great-granddaughter.

In addition to the world of labor, Mr. Levine also wrote poems about jazz, politics and the Spanish Civil War. The common element in his work was the presence of people, working toward something better in life.

“Much of our recent poetry seems totally without people,” he told the Paris Review in a 1988 interview. “Except for the speaker, no one is there. There’s a lot of snow, a moose walks across the field, the trees darken, the sun begins to set, and a window opens. Maybe from a great distance you can see an old woman in a dark shawl carrying an unrecognizable bundle into the gathering gloom.”

He had little patience for vague, self-referential poetry and was not at all interested in writing about nature.

“Hiking,” he said, “was what we did in Detroit when the car broke down.”