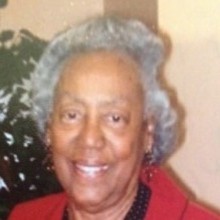 Mildred Jackson was born December 26, 1928, in Orlando, Florida to her parents, Henry Turner and Cleo Turner Lewis. Mildred attended Hungerford Boarding School, played basketball and graduated from Jones High School in 1946. Mildred and her family moved to East Orange and Newark, New Jersey. There she married her first husband, William Boyd Jr. and had a daughter, Shirley Boyd. Mildred held various jobs but her most awarding job was a partner with her friend Verice Smith at Verice's Beauty Salon in East Orange, New Jersey from 1967-1999.

On April 26, 1967, Mildred married the love of her life, Woodrow Jackson. In 1999, Mildred and Woody relocated to Orlando, Florida. Even though she didn't want to move back, she had promised her mother she would not allow Universal Studios to buy her home. Mildred joined Tangelo Baptist Church in June 2000 and was a faithful member since.  Mildred enjoyed life to the fullest. She enjoyed watching her favorite basketball team, Orlando Magic, cooking, playing rub-off lottery tickets and being around family.