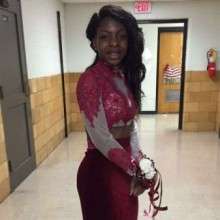 Michelle-Antoinette Lane was born on February 11, 1994, in Memphis, TN to the parents of Willie Clyde Wilkins and Scottlyn Lane.

As a toddler, it seemed as if she already knew what she had wanted to do with her life. Her brother Willie Lane stated that during the 1999 NBA Finals, when the San Antonio Spurs played the New York Knicks Michelle made a comment that went like this, “I want to play in the NBA!” Not knowing that kids (toddlers in diapers) weren’t allowed to participate in such activities. As she grew older many talents grew with her including basketball, songwriting, and art. During her sophomore year in college, she was diagnosed with Thyroid Cancer. She has been fighting cancer for almost 6 years.

On January 8, 2018, Michelle-Antoinette was called to heaven from Nashville, TN. She leaves to mourn her husband of two years, Corey Matthews. Also left behind are her 4 brothers and 2 sisters, Raphael Lane, Christopher Lane, Willie Lane, Lorenzo Lane, Teonica Lane, and Crystal Lane.