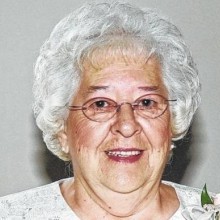 She was born on April 30, 1936 to Eldred Elbert Jackson and Esther Mae Autry in the Cedar Creek community in Cumberland County, N.C. She graduated from Stedman High School, class of 1954, and graduated from the Hamlet Hospital School of Nursing in 1957. She worked at McCain Tuberculosis Sanatorium for one year and then Richmond Memorial Hospital for 15 years, both in the delivery room and in the emergency room.

She married Eldridge Martin Carter Jr. on Feb. 22, 1958 in Bennettsville, S.C. Together, they owned and operated Carter Funeral Home for over 40 years until Eldridge's declining health led to its sale in 1998.

She was preceded in death by her husband; her parents; and her two younger brothers, Elbert Jackson and Asa Jackson.

A funeral service will be held at 2 p.m. Friday in Carter Colonial Chapel. Interment will follow in Eastside Cemetery.

The family will receive friends prior to the service from 12:30 to 1:45 p.m. at the funeral home.

Memorials may be made to the local humane society of your choice.

Condolences may be made online at www.carterfuneral.net.