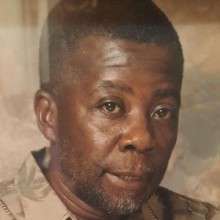 On April 11th,1953 Larry Devon Rouse was born the 7th child to James and Queenie Rouse. The Rouse family welcomed their new addition home in Cumberland, County North Carolina. He attended Armstrong High School on Clinton Rd. He made lasting friendships during his time in school.

He spent a great deal of his time in Dallas, Texas. Dallas would be considered his home for well over 20 years. While there he built a new life for himself. He worked as a maintenance engineer until his return home to Fayetteville.

Upon his arrival home to North Carolina, he spent some time with family in Durham. In Durham, he also worked, as he was not to sit idle. Larry did not like to drive a car. He would only when necessary. He drove his scooter to and from his destination while there. Larry was know as a Jack of all trades. He had a love for the arts. He often spent his time being creative making things with his hands. He loved to draw and paint and often sold his art to lovers of his work.

All who know Larry felt instantly better just having him greet you. His kind spirit always put you at ease. He loved family and the thought of being around them. Larry had a twinkle in his eye and a smile that would light up a room. You could never tell what he was thinking or how he was feeling. What you did know is that he was going to make you laugh.

If he wasn't giving of his time to make you happy, he was enjoying life. He was your riding partner so you would neve be alone. He was never too busy for you. Always avalible, or in his words, "Babyyy, I'm just chilling doing first one thang then another." Always with a chuckle.

Larry will be forever missed. He'll be remembered and loved by many. We keep in mind what the scripture says in Revelations 21-4. "And he will wipe out every tear from their eyes and death will be no more, neither will mourning nor outcry nor pain be anymore. The former things have passed away."

Larry took time to grow closer to Jehovah in the last few years. In that, we can find comfort knowing that he knew the love of God.

Larry is survived by his brothers Ezell, Jerome, Nathaniel and Adolphus Rouse. He is also survived by his only sister Jeanette Riddle. He leaves behind a host of Nieces and Nephews, Cousins and Uncles and their Spouses.

Larry follows the passing of his parents, Jame and Qeenie Rouse. His brothers Michael and Fredrick Rouse.

Freddy Biggs for the love, support, and kindness they showed to him before and after his passing.