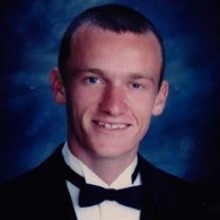 Justin passed away in his sleep on 7/15/2015. He will be missed immensely. He was a very curious child. From the time he was born until his death, he craved knowledge. Never content with the status quo, he was always learning new things. He was a collector (coins, comic books, ect.) Those who knew him well, knew of his vast collection of The Simpsons memorabilia.
Justin was especially proficient at math and computer science. After graduating from Oxnard High School, he obtained his Bachelors of Science in Computer Sciences at Cal Poly Pomona in 2008. At the time of his death, he was working for Assurant in Santa Ana as a programmer. He loved his job.
Justin married his high school sweet heart, Heather Marshall, (now a LCSW), on September 6, 2008. Justin and Heather traveled to Tahiti and Europe where Heather presented her thesis to the World Health Organization.
Sadly, the marriage did not last and they divorced in 2011.
Justin's boss in 2011 was a man named Mike, the owner of Cal Science in Anaheim where Justin worked. Mike thought Justin might be compatible with a former employee of his named Wendy Hsiao (Environmental Inspector) and set them up. Mike was right. Justin and Wendy were together from that day forward.
Justin developed a love for cooking and was very creative with his dishes. He grew his own vegetables and herbs and made his own pasta and sauces.
In addition to his love for Heather, Wendy, his work and cooking, Justin loved his cats, Kona and Newton (newty-patooty as Justin would call him).
Most of all, through, Justin loved his family and his many, many friends.
He leaves behind his mother, Judi Pirkle (attorney), his father, David Fickas, his aunts Mary Ann George, Norma Cunningham, uncle Maxx Cunningham and aunt Danetta Vawter, his uncle Butch Stokes, cousins Brett George, second cousin, Tylor George, Todd George, Aaron Fredette, Ryan Fredette, Leah Fredette, Courtney Fredette, Matthew Hivner, and second cousin Ella Fuchshuber.
He was a brilliant man.
He was a very funny man.
He will be deeply missed.