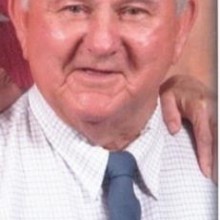 Funeral services will be at 1 p.m. on Thursday at the East Laurinburg Baptist Church officiated by the Rev. Richard Tyson. Burial will follow in Hillside Memorial Park.

John was born on Nov. 28, 1934 in Wilmington, son of the late Joseph and Aileen Matthews Maultsby. He served in the United States Navy Reserves and retired after many years of service with the United States Postal Service. He then enjoyed serving the customers at Poole's Automotive.

He was a longtime faithful member of the East Laurinburg Baptist Church where he served as the church treasurer, deacon, trustee, Sunday School director and teacher. John served his community in the American Legion, Kiwanis and was a past president of the Civitans. For 49 years, he loved being the captain of the Scotland County Football Chain Gang. He also enjoyed bowling and fishing. His greatest job was the time spent with family, friends and being a friend to all.

In addition to his parents, he was preceded in death by his daughter Jody English.

Visitation will be from 6-8 p.m. on Wednesday at Richard Boles Funeral Service.

The family requests that memorials be made in his memory to the East Laurinburg Baptist Church, P.O. Box 1846, Laurinburg, NC 28353.