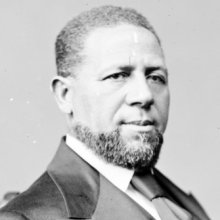 Rev. Hiram Rhoades Revels was a great figure in the push for African American rights. Throughout his life, Mr.Revels did many things in the fight for civil rights for the AFrican American Population of America. In his early years, Mr.Revels owned a barber shop with his brother. When his brother died, the barber shop was left in the ownership of Hiram. After leaving the barber shop, Hiram went to attend the Beech Grove Quaker Seminary. Later, he would attend Knox College. He was later ordained by the African Methodist Church. After he was ordained, Hiram traveled great distances ministering to many African American crowds across the country. In the civil war, Hiram organized two troops of African Americans and served as a chaplain for the Union forces. Due to his efforts in the war, Hiram became an extremely respected figure in the US. He was respected by people from all walks of life and all races. Soon after the end of the war, Mr.Revels took a seat in the US senate, where he would serve for the next year. This same year, he became president of Alcorn college. A few years later, Hiram became the editor of the Southwestern Christian Advocate. Mr.Revels died while attending a church conference. He died where he found his comfort, the church.